I watched a TV show called Combat Hospital on ABC the other night where a private on the front lines became a chronic masturbater. His CO sent him to the hospital shrink, a woman officer. They wrap his hands in gauze to keep them off  his pecker and the lady shrink makes him follow her around with his hands held up in the air. In one scene she rushes into the men's latrine to catch him jacking off and in front of her she makes him raise his hands in the air until he goes limp before she lets him pull his pants up. As this is happening another soldier walks into to relieve himself and she make him go in front of her. I kept hopping she would strap a chastity devise on his junk to make him stop but you know TV and all so this didn't happen. All the humiliation heaped on this soldier by this lady officer was giving me a hard-on, where do I sign up? 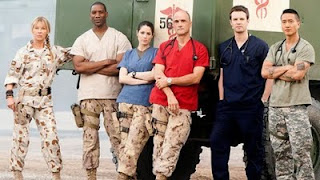 The lady shrink is the one on the far left
Posted by Herboitoy at 1:02 PM